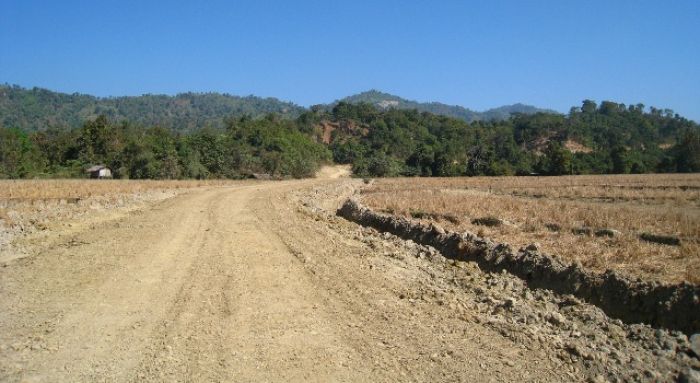 Farmers from Seint San village in Paletwa township have had their rice paddies destroyed to make way for the new Paletwa to Matupi road, a Chin State government project.

Three of the affected farmers, who spoke to the Chin Human Rights Organization (CHRO) on condition of anonymity, described how nobody from the government came to talk to them about the project before it started.

On learning from a neighbour in mid-January that work had started on a road near his rice paddy, one of the farmers went to talk to Nay Myo Aung, the Paletwa Township Assistant Engineer at the project site.

“I told him that they should follow the route of the old road dating back to the British colonial era as that way there would be less damage and our paddy fields would not be so badly affected. I was able to negotiate a little bit, but there was still a lot of damage,” he reported to CHRO.

Forestry department officials told the farmers that as the land is owned by their department, there would be no compensation for damaged land.  In accordance with Khumi customary land use, the farmers have cultivated rice paddy in the area for several decades. However, some don’t hold official land registration documents.

One farmer lost one acre of rice paddy to the project, while another lost two. They told CHRO, “The rice is just to eat, it is not to sell.  So for our families, without that land it means we will not have rice to eat for three to six months this year.”

According to CHRO, when a second farmer tried to negotiate with Paletwa township officials to safeguard his rice paddy, they scolded him for arguing with them and threatened to confiscate all of his land. He told CHRO, “Our government is untouchable.”

Starting from 2007, the rat infestation triggered by the flowering of the Melocanna baccifera bamboo had a severe impact on the Paletwa township area. Villagers from Seint San reported to CHRO that they were badly affected for three years, and unable to harvest even a single basket of rice in that time.  Many families had to borrow rice and money from friends and relatives at the time. They are still heavily in debt, and face ongoing hardship.

A third farmer, who had some mango trees destroyed as a result of the construction project, also tried to negotiate on behalf of his neighbours at the project site. According to CHRO, he told officials, “You should be kind, because the local people will suffer a lot from the loss of this land.  How will they survive?”

In response, Assistant Engineer Nay Myo Aung said, “You should not be so concerned about such small pieces of land.  This is the government’s plan for the people’s development.”