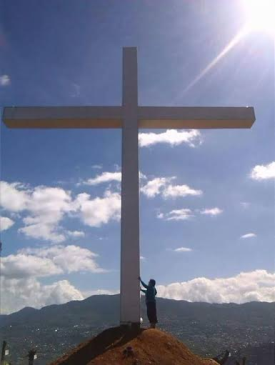 Written by Mizzima Published in Myanmar

A call to uphold freedom of religion has been made by NGOs following an order by the Chin State government to remove a 54-foot-high Christian cross the authorities claim is erected illegally on a hill in Hakha town.

The Chin Human Rights Organization on January 28 urged the Chin State government to overturn an order to dismantle and remove the cross from Caarcaang hill by January 30, and to drop what they say are trumped-up charges against U Tial Cem, a Chin elder involved in erecting the cross.

U Tial Cem, has been accused of cutting down pine trees without official permission, in breach of Article 42 (b) of the 1992 Forest Law. He was due in court on January 28, one of several summonses he has been subjected to. He could be sentenced to a maximum of two years in prison if found guilty, the NGO reports.

Legal action could also be taken against U J.P. Biak Tin Sang, also involved in erecting the cross.

Speaking in support of the Chin NGO’s call, Mr Mervyn Thomas, chief executive of Christian Solidarity Worldwide, said:“The destruction of Christian crosses in Chin State has long been a policy of the Burmese authorities, often accompanied by forcing Chin Christian villagers to build Buddhist pagodas in their place. If Burma is to proceed down a genuine path of reform, it must protect the most basic human right of freedom of religion, and allow Christians in Chin State to construct symbols of their religion in appropriate ways.”

Mr Thomas, commenting in a press release, said: “The order to destroy this cross, and the prosecution of the Chin elder, illustrate once again that freedom of religion continues to be violated in Burma. We call on the authorities in Chin State to rescind the order to destroy the cross and to drop the charges against Tial Cem.”

U Tial Cem told CHRO that he and a nearby land owner U J.P. Biak Tin Sang did not seek official permission for the cross as they did not believe it would be granted. Chin Christian organisations face discriminatory restrictions which make it virtually impossible to secure such official permission for religious monuments and buildings.

The Chin NGO has detailed the persecution in their 2012 report, “Threats to Our Existence: Persecution of Ethnic Chin Christians in Burma,” which outlines the restrictions in detail and documents the destruction of 13 Christian crosses in Chin State, four of which were destroyed under President U Thein Sein’s government.

U Salai Bawi Lian Mang, executive director of CHRO, said the order to remove the cross continues a decades-long pattern of religious discrimination against Chin Christians.

CHRO says local people in Hakha have received written permission from the Hakha Township police force to hold demonstrations protesting the government order to remove the cross on February 2 and 3.

Protest organisers have been informed by Chin State Chief Minister U Hung Ngai that the cross was planted without seeking official permission from the government, and was therefore illegal, but that the matter would be discussed further at a meeting of the Chin State cabinet, which is likely to take place in the week beginning February 2, the NGO reports.

It remains to be seen if the order for the removal of the cross will be enforced on January 30, according to the NGO.