More people are fleeing from multiple villages in Matupi Township and moving towards the Indian border following the brutal summary killings of at least 10 civilians last week and as the military junta reinforces troops into the areas under the Tactical Operations Command in Matupi in southern Chin State.

On January 6 at around 8:30 am, junta soldiers from LIB 140 of Matupi-based Tactical Operations Command arrested seven people who were traveling by motorbikes on the road between Kihlueng and Lunghlaw villages, northwest of Maputi Town. The arrests took place at a location about one mile outside of Kihlueng village. One of the travelers in the group is a 56 year-old villager (Name withheld) who turned away and escaped immediately upon witnessing the arrests of his traveling companions who were driving ahead of him. On the next day at around noon on January 7, villagers discovered 8 dead bodies, including that of a 13-year-old boy whose throat was slashed along the stretch of dirt road between Kihlueng and Lunghlaw. All the dead bodies have their hands tied behind their backs and bore knife wounds to the torso area and slashed throats. Two more bodies were discovered at a location between Kihlueng and Kace, another village in the area north of Kihlueng, the same day.

Among those summarily executed is Pu Tui Dim (55), a former staff member working for CHRO for many years before moving on to co-found Khonumthung News and worked as its Editor-in-Chief. The following is the list of persons who were brutally murdered by the junta. 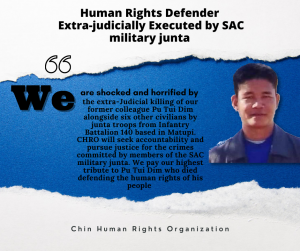 Horrified by news of the brutal killings, more than 1000 civilians from at least six villages in the area, including Kihlueng, Kace, Boitia, Ngaleng, Lunghlaw and Tibaw villages have all fled and are taking shelter at Amlai, Rengkhen and Tangku villages. But as troops are reinforced in the areas, the IDPs, along with civilians from their host villages have further moved towards Sumsen and Sabawngpi, which are located closer to the Indian border. Some have crossed into Mizoram, including a witness to the arrests on January 6 of a group of travelers whose bodies were later found. 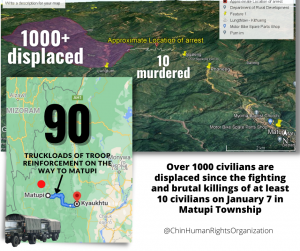 At least 90 truckloads of soldiers, ammunition and supplies are heading to Matupi and have been traveling from Kyaukhtu in Magway since January 9. As of January 11, the troops are on the way between Mindat and Matupi and have met with ambush from local resistance groups from the Chinland Defense Forces. Maputi is the base of one of the two Tactical Operations Command, which has an existing strength of three stationary battalions under its command (LIB 140, IB 304 and LIB 274 based in Mindat). The reinforcement are believed to be from some of the notorious Light Infantry Divisions, which are deployed in swift tactical situation and as a quick mobile combat force.