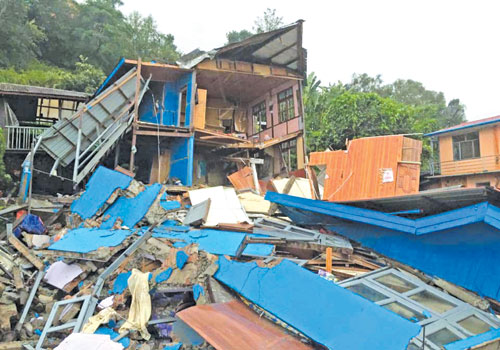 Mountain ranges across Chin State offer stunning scenery but also contribute to frequent landslides. Chin State is the poorest region in Myanmar, and frequent natural disasters prevent the 500,000 Chin people from fully enjoying government and development partner efforts to lift them out of poverty. Making matters worse were the heavy monsoon rains in July and August that lashed the state and generated devastating landslides.

Recently, the joint World Food Programme/ADB Myanmar team travelled to the Western part of Myanmar to observe first-hand the damage and impacts of the unprecedented floods and landslides. Chin State has been declared one of the four disaster zones that were severely affected by the recent extreme weather. In Chin State over 20,000 people were fully displaced and more than 3800 houses were destroyed.

The team departed Kalay in Sa-gaing State – itself badly affected by rains and flooding – on August 29 to travel along the winding mountain road to Hakha, the picturesque capital of Chin State. The original plan had been to return on the road to the south via Gangaw, but this critical access road had been blocked by landslides for several weeks already.

Early in the 13-hour trip, it became clear that road access – on both major and minor roads – has been seriously disrupted and remains highly vulnerable, especially to the heavy rains that Chin State normally experiences each September to October. The main road from Kalay to Hakha, along with its buildings perched on stilts high above the valleys, has been transformed by the extreme weather conditions and is barely passable in places. Some road sections have been completely washed away, requiring construction of temporary bypasses, and many more segments have been partially damaged or covered in mud. Bridges have been substantially destroyed, and water flowing over many sections steadily washes away the road material. Large numbers of village access roads have been either damaged by floods or completed obliterated by landslides.

A key takeaway from our visit was that the nature of the damage triggered by the heavy rains and compounded by the resulting landslides and earthquake effects is different in nature from that of the flash floods and river overflows in other affected areas. Damage to villages and buildings tends to be complete, so most affected people have no household to return to – and in many cases, no land plot either. This means that many displaced people will spend extended periods in public buildings or temporary camps, and require ongoing food supplies as livelihoods will take longer to reestablish.

After the long day on damaged single-lane roads, we arrived in Hakha after sunset, as the moon rose over the hillside capital and the household lights twinkled into the distance. It was not until the harsh light of day that we were able to view the dramatic damage – including an area very close to our guest house where a number of commercial buildings had completely collapsed. Above the older section of the town, a major landslide flowed through a large water reservoir and destroyed most of the old city lying below, which now stands largely deserted. Even in areas where landslides did not directly reach, the earthquake-like land-shaking effects severely damaged many roads and buildings, including schools and churches.

On the positive side, one noticeable feature of the disaster response to date has been the rapid and effective measures taken by the government and civil society, as well as the highly visible resilience shown by affected persons. The night before we arrived in Kalay on August 28, two villages across the Chin border were completely destroyed by a nighttime landslide. Fortunately no one was hurt, as a monk heard the approaching menace. Within the day, all residents from the 65 destroyed households were relocated to a tent camp some distance away and supplied with emergency food and water by WFP, with UNICEF providing child-friendly facilities.

And large numbers of heavy earth moving equipment have been deployed along the main connection between Kale and Hakha and have succeeded in keeping the road open in the face of numerous landslides.

During our short stay in Hakha, the UNICEF’s head of office in Chin State kindly hosted a dinner with other development partners. It became very clear that donor involvement in Chin State is very limited, and that information on the extent of the damage has not spread widely.

Before setting off for the 12-hour drive back to Kalay, we had a meeting with the Chin State minister and his cabinet, and were again impressed by the professionalism with which the disaster response has been handled. He stressed the tremendous ongoing needs for food, especially for those destined for long stays in the camps, and for road reconstruction to ensure continued access and to consolidate the temporary emergency repairs.

In sum, the key message that we take away from our mission is that the disaster damage in Chin State appears much more serious than expected or perceived by the government and aid agencies. A major landslide could cut the state’s only remaining lifeline from Kale to Hakha for many weeks. In view of all this, the isolated and poor mountainous state deserves more attention and support in this time of serious need.