Thank you for giving me the opportunity to appear before you this evening to speak about the situation of Chin people under military junta of Myanmar, which calls itself the State Administrative Council. My name is Salai Za Uk Ling and I represent the Chin Human Rights Organization, a group that has been documenting the human rights situation of Chin people for the last 27 years with a UN ECOSOC Special Consultative Status since 2018.

I am here to speak about the humanitarian consequences of the attempted coup with specific regards to the situation in Chin State, where I come from. I am doing so with the view of reminding all of us to stay laser-focused on who is responsible for the horrors of the past year and a half, and the urgent need for accountability and justice for the crimes committed, thus far with complete impunity. Let us be very clear that as we speak here today, the chief criminal mastermind who presided over the killings and mass atrocities against the people of Myanmar, General Min Aung Hlaing, is freely travelling internationally and visiting Russia, and the arm of international justice system is yet to reach him for the crimes he has committed. But I hope that this hearing will be the beginning of laying an important groundwork and providing impetus for advancing accountability and justice process in Myanmar.

That said, for the past year and half, Chin State with a Christian majority and a population of just below half a million, or one percent of the country’s population, has not escaped the kinds of atrocities and terrors at the hands of the Myanmar Army. In fact, the state has been one of the primary targets of military’s campaign of annihilation. I am using the word annihilation here because this is the exact word used by the junta’s spokesperson right before the start of their brutal military campaign around April last year. This should be emphasized because it was a public expression of criminal intent for what the army would do in the ensuing months. Our organization has closely monitored and documented incidents and patterns of the gross violations by the military over the period, and this is what we have found as of this month. 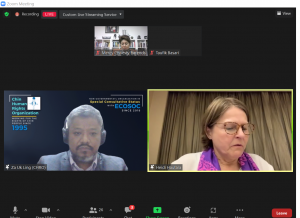 As you can see, despite being only 1 percent of the entire population, Chin State has suffered from disproportionate share of serious rights violations and related humanitarian crisis. The Tatmadaw is currently sending in two large military columns into Chin State, and there has been intense fighting in the north over the past three weeks. Soldiers from LID 22 have burned down three villages in Falam and Hakha Townships and summarily executed two civilians during this latest expedition. Fighting is also flaring up in the south as the reinforcement convoy is traveling from Pakhoku as we speak. The SAC troops are blocking all access routes to Chin State and preventing commercial traffics and basic commodities from entering to the area, including international humanitarian aid. This is all part of a strategy aimed at collective punishment under the four cuts practice. The objective is to establish strategic military dominance in the region by depopulating the entire region or pushing people into starvation, and eventually forcing them into submission under the military’s control. There is no end in sight for these gross violations being committed with impunity. The international community must act swiftly and decisively to tackle the culture of impunity and address the humanitarian needs of the people in the region. Everyday that action is delayed is another day that more people are dying and suffering. Something consequential needs to be urgently done to address the unfolding humanitarian disaster.

CHRO recommends the following course of action for the international community: