Junta troops from Light Infantry Division 11 and 77 are occupying the St. Michael’s Catholic Church in Kanpetlet starting from December 11. The same units were accused of the brutal killing of

pastor Om Kuai of the Kanpetlet Church of Jesus Christ on Sunday, December 12. He was arrested by the soldiers on his way back to Kanpelet Town after visiting his grandmother living in a nearby village. His body was found on December 13 near Pan Lay Pyi Hotel, with a headshot wound and bowels cut open. Pastor Om Kuai, in his late 20s, had been living in nearby Magwe Region’s Saw Town as an internally displaced person after fleeing the town due to recent fighting and was returning to the area on a brief visit to his grandmother when he was brutally killed. 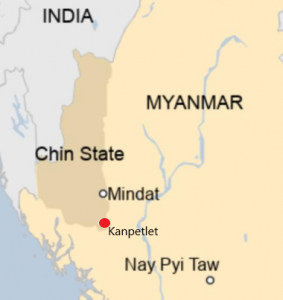