A 22 year-old woman is dead and two others received bullet wounds, including her husband, when junta troops from LIB 266 operating under Tactical Operations Command in Hakha, opened fire on a traveling vehicle four miles outside of Hakha this morning.

Siang Hnem Cer (22) was shot in the head and her husband Paul Lian was injured in shoulder, while a third person, Kep Tin Hre received two bullet wounds to the upper thigh. The injured are being treated at a hospital in Hakha. The body of Siang Hrem Cer was transported to her native Falam Town for burial at around 3 pm local time. 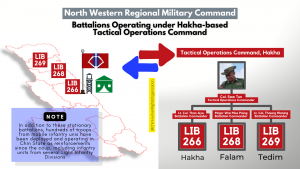 The three were traveling in a private SUV from Hakha to Gangaw when they were ambushed by junta troops at around 8:30 a.m. local time. The driver stopped the vehicle on the road when he heard gunfire. Moments later, soldiers sprayed automatic gunfire on the parked car, hitting the woman on the head and killing her instantly. The remaining two in the vehicle were also hit by the spray of bullets.

The soldiers were believed to be hiding in the bushes by the roadside to keep watch on the movement of resistance forces in the area.

Hakha-Gangaw highway is one of only three main highway linking Chin State to the rest of the country with military checkpoints stationed at key junctions. Vehicles traveling along the highway are subject to strict inspections, including commercial goods and passengers as the junta imposed restrictions on movement and food, medicines and humanitarian aid as part of the four-cuts counter-insurgency tactics.