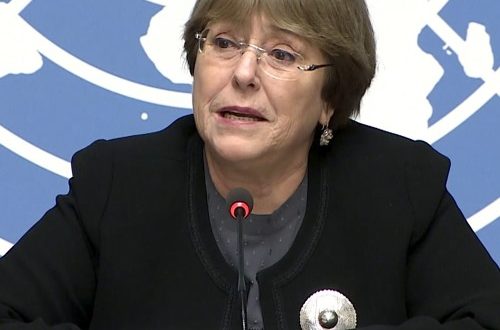 GENEVA (28 January 2022) – UN High Commissioner for Human Rights Michelle Bachelet on Friday urged the international community to intensify pressure on the military to stop its campaign of violence against the people of Myanmar and to insist on the prompt restoration of civilian rule.

“One year after the military seized power, the people of Myanmar – who have paid a high cost in both lives and freedoms lost – continue to advocate relentlessly for their democracy,” Bachelet said. “This week, I had a chance to speak in person with determined, courageous human rights defenders who are pleading to the international community not to abandon them, but to take robust, effective measures to ensure their rights are protected and the military is held accountable.”

“I urge governments – in the region and beyond – as well as businesses, to listen to this plea. It is time for an urgent, renewed effort to restore human rights and democracy in Myanmar and ensure that perpetrators of systemic human rights violations and abuses are held to account.”

Bachelet said she had heard chilling accounts of journalists being tortured; factory workers being intimidated, silenced and exploited; intensified persecution of ethnic and religious minorities – including the Rohingya; arbitrary arrests, detentions and sham trials of political opponents; “clearance operations” targeting villagers; and indiscriminate attacks including through airstrikes and the use of heavy weaponry in populated areas, showing gross disregard for human life.

“And yet, courageous human rights defenders and trade unionists continue to protest, to advocate, to document and accumulate the mounting evidence of violations,” she said.

The brutal effort by security forces to crush dissent has led to the killing of at least 1,500 people by the military since the 1 February coup – but that figure does not include thousands more deaths from armed conflict and violence, which have intensified nationwide.

The UN Human Rights Office has documented gross human rights violations on a daily basis, the vast majority committed by security forces. At least 11,787 people have been arbitrarily detained for voicing their opposition to the military either in peaceful protests or through their online activities, of whom 8,792 remain in custody. At least 290 have died in detention, many likely due to the use of torture.

Armed clashes have grown in frequency and intensity, with every part of the country experiencing some level of violence. In those areas of highest intensity military activity – Sagaing region, Chin, Kachin, Kayah and Kayin states – the military has been punishing local communities for their assumed support of armed elements. The Office has documented village burnings, including places of worship and medical clinics, mass arrests, summary executions and the use of torture.*

The crisis has been exacerbated by the combined forces of the COVID-19 pandemic and the collapse of the banking, transportation, education and other sectors, leaving the economy on the brink of collapse. The daily lives of people have been severely impacted, with devastating effects on their enjoyment of economic and social rights. There are projections that nearly half of the population of 54 million may be driven into poverty this year.

“Members of Myanmar civil society have told me first-hand what the impact of the last year has been on their lives and those of their families and communities,” Bachelet said. “The people have shown extraordinary courage and resilience in standing up for their basic human rights and support each other.

Now the international community must show its resolve to support them through concrete actions to end this crisis.”

While there has been near universal condemnation of the coup and the ensuing violence, the international response has been “ineffectual and lacks a sense of urgency commensurate to the magnitude of the crisis,” Bachelet said. The actions taken by the UN Security Council and by the Association of Southeast Asian Nations (ASEAN) have been insufficient to convince Myanmar’s military to cease its violence and facilitate humanitarian access and aid deliveries. The High Commissioner welcomed some private corporations’ decisions to withdraw based on human rights grounds, as a “powerful tool to apply pressure on the financing of the military’s operations against civilians”.

Bachelet also stressed that the current human rights crisis is “built upon the impunity with which the military leadership perpetrated the shocking campaign of violence resulting in gross human rights violations against the Rohingya communities of Myanmar four years ago – and other ethnic minorities over many decades beforehand.”

“As long as impunity prevails, stability in Myanmar will be a fiction. Accountability of the military remains crucial to any solution going forward – the people overwhelmingly demand this,” Bachelet said.

* The UN Human Rights Office will publish a report in March 2022 detailing the human rights situation in the country since the 1 February 2021 coup.

OHCHR | Myanmar: One year into the coup, Bachelet urges governments and businesses to heed voices of the people, intensify pressure on the military