As of July 1, there were 726 new arrivals in India’s northeast, bringing the total number of refugees to 41,000, according to the latest report issued this week by the UN High Commissioner for Refugees (UNHCR).

It said over 76 percent sought shelter in Mizoram and 13 percent in Manipur.

The UNHCR said there was an uptick in cross-border movement in June following armed clashes in northwest Myanmar.

“With the start of the monsoon season in June, there is an urgent need for semi-permanent shelters in Mizoram and Manipur,” the agency said.

Politicians, lawmakers, police and their families were among the refugees, mostly from Chin state which borders the Champhai district of Mizoram.

Most people who fled to India share an ethnic affinity with the Mizo people in Mizoram and have family ties with people in the Christian-dominated state.

There is ongoing fighting in northwestern Myanmar including Christian-majority Chin state where the military has used air strikes and artillery shelling against strong resistance from new militia groups that has led to thousands of people being displaced, according to media reports.

The impoverished region, which had not seen conflict for decades, has been at the forefront of resistance to the military regime and has witnessed fierce retaliatory attacks including aerial bombing, heavy artillery and indiscriminate attacks on civilians. 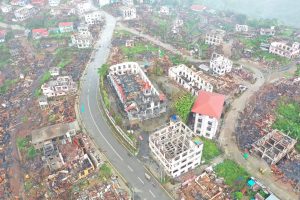 Dozens of churches including Catholic ones have been set ablaze, vandalized and destroyed by junta soldiers while priests and pastors have also been targeted.

The Southeast Asian nation has witnessed intense fighting between the junta and rebel forces in other predominantly Christian regions such as Karen and Kayah states, where civilians have been forced to leave their homes and flee to forests or seek shelter in church institutions.

As of July 4, an estimated 1,116,000 internally displaced persons were reported, including some 769,000 people who have been displaced within Myanmar since February 2021, according to the UNHCR.

The junta has killed nearly 2,100 people including hundreds of children and detained more than 14,000 people since last February’s coup.