Chin Human Rights Organization (CHRO) today published an updated list of ethnic Chin individuals who have been arrested and arbitrarily detained over the last two months since the coup de’tat on 1 February 2021. The list is a compilation of reported cases of arrest ─ both within and outside of Chin State – which CHRO has been able to confirm, and contains the status and whereabouts of detainees.

“We remain extremely concerned about the arbitrary nature of the ongoing arrests and detention, which are now accelerating quickly with security forces now operating as if they have no bounds and arresting anyone they see on the streets,” said Salai Bawi Lian Mang, Executive Director of Chin Human Rights Organization.

CHRO is particularly concerned by the alleged use of torture and ill-treatment of detainees, especially during their initial stage of detention before they are transferred to police custody from the army base. CHRO is calling on the junta to immediately release all those it has detained since 1 February and to refrain from any further arrests and detention.

Chin Human Rights Organization continues to condemn the Burmese military junta’s systematic use of arbitrary arrest and detention of civilians as part of a broader campaign to intimidate the public and silence dissent. Since the coup de’tat on 1 February, the self-styled State Administration Council (SAC) military junta has made scores of arrests beginning with government leaders and members of the Election Commission. As public protests widen, the junta resorted to targeted arrests and illegal raids on private homes, as well as indiscriminate and arbitrary arrests and detention of ordinary civilians on the streets. 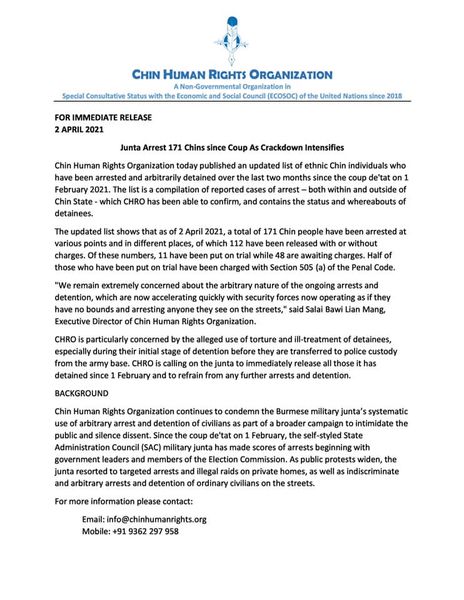