Hardships for the embattled Chin minority in Myanmar’s poorest state 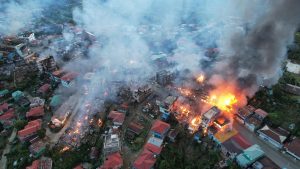 This aerial photo taken on October 29, 2021 show smokes and fires from Thantlang, in Chin State, where more than 160 buildings have been destroyed caused by shelling from Junta military troops, according to local media. Photo: AFP
Remote and dirt poor, Chin State is cropping up in the Myanmar news for all the wrong reasons. The primarily Christian Chin minority is in the cross-hairs of bitter conflict, with the towns of Mindat and Thantlang making the news. But what does the wider world know about this state?

Sitting snug against the Indian border, Chin State, arguably the poorest state in Myanmar has more in common with neighbouring India’s Mizoram State than the Bamar region of central Myanmar.

One of the smallest states in Myanmar, it covers 36,019-square-kilometres but it is relatively sparsely populated with only about 479,000 inhabitants, of which more than 221,000 are children, according to the 2014 census.

It is an underdeveloped mountainous state with few roads. Many people live in small, high, remote villages that are hard to access. Traveling by road between some areas in northern and southern Chin State is sometimes impossible and requires travellers to leave the state and go via Sagaing Region. For many people in Chin State it is easier to get to India than central Myanmar.

Aid agency, the United Nations Children’s Fund (UNICEF), says that more than seven people in 10 in Chin State live below the poverty line. In a 2015 survey, almost 80 percent of households reviewed had poor or borderline food security. One in 10 children are not expected to live to age five. The state recorded the highest rate in Myanmar of child stunting (41 per cent) in 2015, and 17 per cent of children are underweight. Only 15 per cent of children are born in a health facility.

The extremes and vagaries of the weather have had an impact on farming and the level of development in the state. Flooding and landslides devastated Chin State from June to August 2015. The Chin Committee for Emergency Response and Rehabilitation (CCERR) estimated that 54,537 people had been affected by the adverse weather in Chin State. The countryside in many areas still bears the scars of massive landslides.

Speaking Burmese in many parts of Chin State will not get a traveller very far as many Chin do not even speak Burmese. The Chin are ethnically far more similar to the Mizo in Mizoram State and they speak dialects of the same language, though there are a wide variety of Chin people, with 53 different subtribes and languages in Chin State.

The Chin and Mizo people have a long and deeply shared cultural history. They have the same ethnic roots and are both part of the Zo ethnic group. They speak the same Tibeto-Burman languages and are bonded by the same customs, cultures and traditions. There is a history of intermarriage and family kinship on both sides of the border.

The Mizos have long believed that the people of Bangladesh’s Chittagong Hill Tracts, Myanmar’s Chin Hills, and India’s Mizoram and the Assam States are one ethnic group, divided into three nations by the British.

The Mizo and Chin are also Christians, whereas the Bamar are primarily Buddhist. Originally the Chin were animists, but they were converted to Christianity by American Baptists. The first of the Baptist missionaries to come to Chin State were Reverend Arthur E. Carson and his wife, Laura, who arrived in Hakha, the Chin State capital on 15 March 1899. They are revered in Chin State for having bought Christianity to the Chin and there is even a museum dedicated to Reverend Carson in his old house in Hakha.

Other Baptist missionaries from the U.S.A. followed Reverend Carson at the beginning of the 20th Century. They were extremely successful with their conversions. Now, over 90 per cent of Chin people are Christians and churches are at the centre of society. Pastors and ministers are very respected and often have leadership roles in society.

Every Sunday everyone goes to church and towns and villages are deserted until everyone pours out of the churches in their Sunday best. Apart from Baptist churches, there are also Roman Catholic, Anglican, Methodist and Evangelical churches in Chin State.

Prior to the February 2021 coup there were no very large, powerful ethnic armed organisation (EAO), unlike in some other ethnic areas such as Kachin, Karen and Shan states where there were large EAOs fighting for autonomy.

While all those states saw extensive fighting at times since the military originally took power in 1962 under General Ne Win, there was less fighting in Chin State and no Chin EAO fighting for autonomy

The goals for the CNF/CNA when it was formed was to help secure self-determination for the Chin people, democracy and the establishment of a Federal Union of Myanmar. It was not a big or powerful organisation and never had more than 200-300 active members prior to 2021.

Despite this, the CNA still clashed with the Myanmar military and in the period between 1988 and 2012 at least 70 CNA soldiers were reportedly killed in fighting with the military. But there was little fighting after 2003 and in 2012 the CNF signed a ceasefire with the military.

In October 2015 the CNF were one of the eight EAOs to sign the Nationwide Ceasefire Agreement (NCA) with the army at the end of President Thein Sein’s term.

Until the military coup in February 2021 Chin State was relatively peaceful, but since the coup it has seen more than its fair share of violence, regularly cropping up in the Myanmar news.

The CNF/CNA was said to be the first EAO to ally itself with the National Unity Government (NUG). More guerrilla groups have also sprung up in Chin State to help the CNA in its fight against the junta. They include, amongst others, the Chin National Organisation (CNO) and its armed wing, the Chin National Defence Force (CNDF), which were formed on 13 April 2021, and the Chinland Defence Force that was formed on 4 April 2021.

Violence has ratcheted up in Chin State. Some notable atrocities have included the junta army’s attack on Mindat Town in May 2021. They used captured youths as human shields and, according to the Chin Human Rights Organization (CHRO) may have committed war crimes and “grave breaches of the Geneva Convention” in the town.

Another atrocity was the burning down and complete destruction of Thantlang Town leading to all the residents fleeing the town, at the end of 2021.

The violence since the coup has displaced an unprecedented amount of people in Chin State.

According to the United Nations Refugee Agency (UNHCR) in December 2020, just prior to the coup, there were only 6,300 internally displaced people (IDPs) in Chin State, some of whom fled their homes due to natural disasters such as landslides, rather than due to violence.

But the junta army has not had it all its own way in Chin State. In March 2022 a CNA/CNF spokesperson told Irrawaddy that they run their own schools, charities and clinics in almost all the rural areas of Chin State except Paletwa Township.

He estimated that they controlled about 75 per cent of Chin State, but that the junta still control the urban areas and the roads connecting towns. But, the junta’s control of the roads is far from complete. They often face mine attacks by resistance groups on the roads that cost them many casualties and make travelling between towns very slow.

Like nearly all areas of Myanmar Chin State has seen a massive increase in violence and displaced people and the situation will likely only improve once the junta are forced out of power.