The Chin Human Rights Organization (CHRO) today welcomes the formation of the National Unity Government (NUG) by the Committee Representing Pyidaungsu Hluttaw (CRPH) – a representative body made up of parliamentarians duly elected from the 2020 elections. The formation of NUG represents a historic milestone in the struggle for freedom, human rights, equality and democracy for all the peoples of Burma/Myanmar.

CHRO wishes to take this opportunity to congratulate all the duly elected members of the NUG and send our best wishes as they strive to provide new direction of leadership for a wounded nation that still finds itself in the midst of chaos, bloodshed and immense grief. All the peoples of Burma/Myanmar regardless of ethnicity, religion or political affiliations, should now stand united firmly behind the NUG and boldly move together to confront the junta leaders to deny them the legitimacy and capability they need to gain effective control of the rein of government through illegal and violent means.

The peoples of Burma/Myanmar have never come closer to realizing their aspirations for federalism and democracy in nearly the last three quarters of a century than this momentous time. And the formation of the NUG at this particularly significant time provides vitally important impetus towards political self-determination, peace, prosperity and democracy. The NUG must now seize this historic opportunity to learn from past mistakes of successive governments, civilian or military, to focus on addressing the root causes of structural injustices in order to forge a truly united front that can chart a new course towards ethnic political equality under a federal political framework.

“With the NUG having now emerged to provide a credible and brighter alternative to the ever darker and destabilizing prospects presented by the junta, the international community has a unique opportunity and obligation to collectively recognize the NUG as the only legitimate government of Burma/Myanmar,” says Salai Bawi Lian Mang, Executive Director of CHRO.

Burma/Myanmar’s future now hangs in the balance. The country’s peaceful democratic future is woven into the need to promote and strengthen the ideals of federalism, civilian supremacy, the rule of law and respect for human rights and the rights of minorities It is high time to reject in its totality the Tatmadaw’s unrelenting quest for eternal domination over Burmese/Myanmar politics and to seek a new beginning with a new and rebuilt military as a truly respected and professional institution whose sole mission is to defend and protect all the peoples of Burma/Myanmar. Towards this end, it is high time for those in the military and members of the uniform services to break ranks and shift their allegiance to a more hopeful future provided by the NUG than that promised by leaders of the junta, whose sole interests lies in entrenching their oligarchy and enriching their immediate family members.# 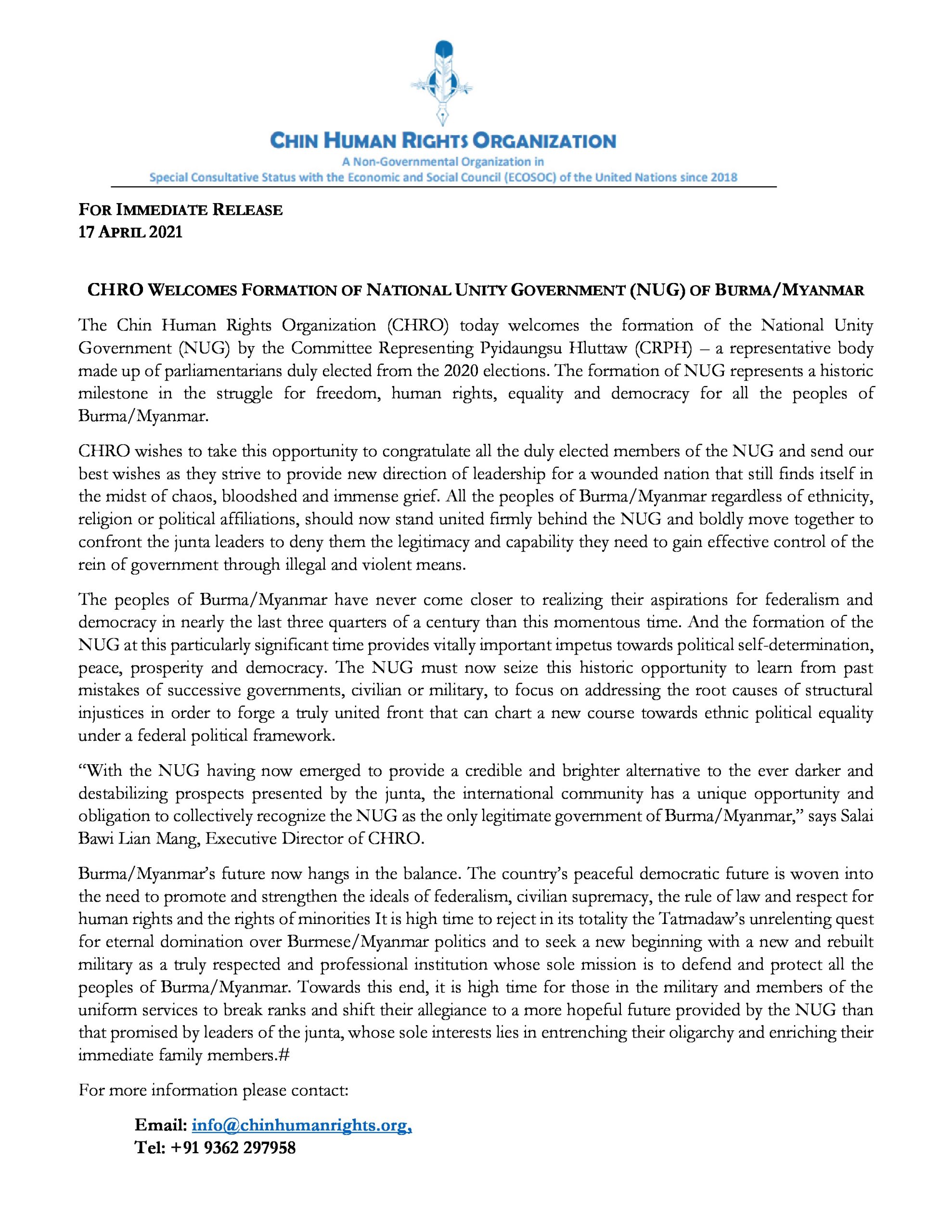