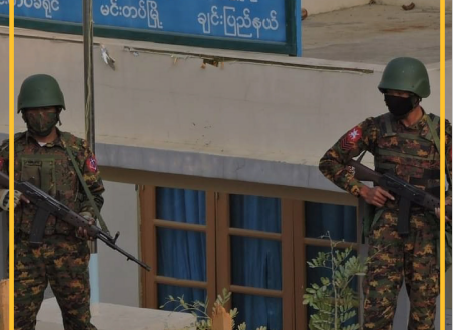 Residents in Matupi and Mindat townships in southern Chin State are running out of food as Myanmar’s regime has blocked supplies.

A Matupi volunteer said communities have almost run out of rice.

“The prices of oil and salt have increased. Three eggs cost 1,000 kyats [compared to around 150 kyats per egg in Yangon] and they are scarce. Most people can’t afford them,” she said.

The roads are blocked by the regime although there is no fighting with the Chinland Defense Force (CDF). A 61-liter rice sack was around 4,000 kyats before the coup in Matupi and they are now 66,000-70,000 kyats, when they are available, according to residents.

Residents are buying broken rice for around 45,000 kyats per sack. The regime is beginning to allow some residents to leave the town in private vehicles, said a Matupi resident.

“Patients who need hospital treatment can leave. Neighbors ask them to bring back food. They bring back eggs and dried fish but no rice and oil,” she said.

Mindat has been isolated and surrounding villages are often shelled, despite the lack of fighting, residents said.

“We have left our villages and farms. We are struggling to survive and concerned for our safety and food,” a villager told The Irrawaddy.

The Mindat CDF said junta helicopters and Light Infantry Battalion 274 based in Mindat are bombing villages.

More than 60 Mindat residents are reportedly in Pakokku Prison and around 30 are being held at Battalion 274 in Mindat.

It called for international charities to help displaced Mindat civilians.

Mindat residents said junta soldiers detained a man and woman in Kyawttaw village on July 6. Some villagers were reportedly injured when two helicopters dropped bombs on two villages on July 2. A school, church and some houses were damaged.

The regime shells villagers because it only controls Mindat town and adjacent villages, said the CDF.